A visual explanation of the PGM Index

Few months back, a HN post about learned indexes caught my attention. 83x less space with the same performance as a B-tree? What sort of magic trick is this?! And why isn’t everybody else using it if it’s so good?

I decided to spend some time reading the paper to really understand what’s going on. Now reading a scientific paper is a daunting endeavour as most of it is written in small text, decorated with magical Greek symbols, with little to no diagrams for us lay people. But this is really a beautiful piece of data structure which deserves to be used more widely in other systems, rather than just languish in academic circles.

So if you have been putting off from reading it, this post is my attempt at a simplified explanation of what is in the paper. No mathematical symbols. No equations. Just the basic idea of how it works.

What is an index

Let’s consider an array of sorted integers. We want to calculate the predecessor of x; i.e. given x, find out the largest integer in the array lesser than or equal to x. For example, if our array is {2,8,10,18,20}, predecessor(15) would be 10, and predecessor(20) would be 20. An extension of this would be the range(x, y) function, which would give us the set of integers lying within the range of x and y. Any data structure satisfying these requirements can be essentially considered as an index.

If we go through existing categories of data structures:

Which brings us to B-tree based indexes and its variants being the go-to choice for such operations, and is widely used in all databases.

What is a learned index

In a learned index, the key idea is that indexes can be trained to “learn” this predecessor function. Naturally, the first thing that comes to mind is Machine Learning. And indeed, some implementation have used ML to learn this mapping of key to array position within an error approximation.

But unlike those, the PGM index is a fully dynamic, learned index, without any machine learning, that provides a maximum error tolerance and takes smaller space. 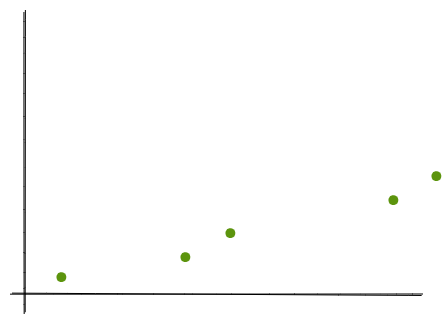 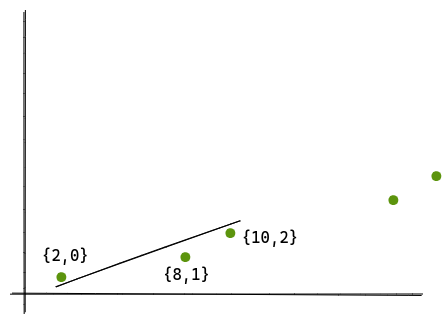 So any value lying within [2,10] can be mapped with this line. For example, let’s try to find predecessor(9). We take 9 to be the value of x and plot the value of y. 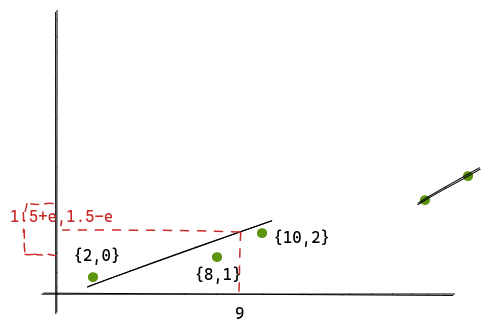 Once we get y, the algorithm guarantees that the actual value will lie within a range of {-e, +e}. And if we just do a binary search within a space of 2e + 1, we get our desired position.

That’s all there is to it. Instead of storing the keys, we are just storing the slopes and intercepts, which is completely unrelated to the size of the data, but more dependent on the shape of it. The more random the data is, we need more line segments to express it. And on the other extreme, a set like {1,2,3,4} can be expressed with a single line with zero error.

But this leads to another problem. Once we have a set of line segments, each line segment only covers a portion of our entire key space. Given any random key, how do we know which line segment to use? It’s simple. We run the same algorithm again!

The algorithm to construct the index is as follows:

At the end, we will get an array of tuples of (point, slope, intercept). 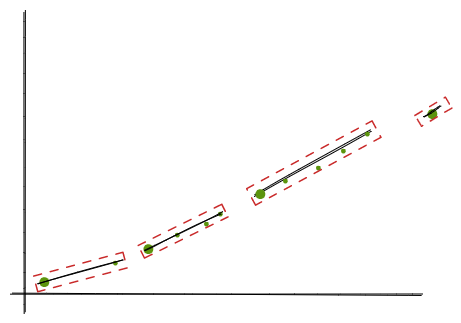 Now let’s wipe all the remaining points except the ones from the tuples and run the same algorithm again. 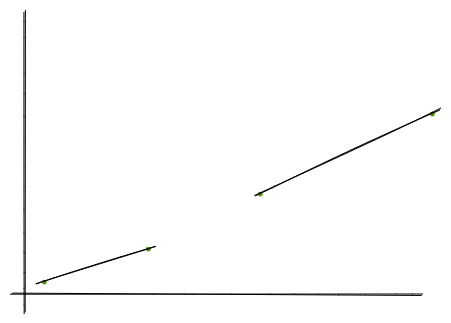 We see that each time, we get an array of decreasing size until we just have a root element. The in-memory representation becomes something like this:

The algorithm to search for a value is as follows:

The paper proves that the number of tuples (m) for the last level will always be less than n/2e. Since this also holds true for the upper levels, it means that a PGM index cannot be worse than a 2e way B-tree. Because if at every level, we do a binary search within 2e +1, our worst case time complexity is O(log(m) + log(e)). However, in practice, a PGM index is seen to be much faster than a B-tree because m is usually far lower than n.

Insertions and deletions in a PGM index are slightly tricker compared to traditional indexes. That is because a single tuple could index a variable and potentially large subset of data, which makes the classic B-tree node split and merge algorithms inapplicable. The paper proposes two approaches to handle updates, one customized for append-only data structures like time-series data. Another for general random update scenarios.

In an append-only scenario, the key is first added to the last tuple. If this does not exceeed e threshold, the process stops. If it does exceed, we create a new tuple with the key, and continue the process with the last tuple of the upper layer. This continues until we find a layer where adding the key remains within the threshold. If this continues till the root node, it gets split into two nodes, and a new root node gets created above that.

For inserts that happen in arbitrary positions, it gets slightly more complicated. In this case, we have to maintain multiple PGM indexes built over sets of keys. These sets are either empty or have size 20, 21 .. 2b where b = O(log(n)). Now each insert of a key k finds the first empty set, and builds a new PGM index from all the previous sets including the key k, and then the previous sets are emptied. Let’s take an example. Assume we are starting from scratch and we want to insert 3,8,1,6,9 in the index.

The deletion of a key d is handled similar to an insert by adding a special tombstone value that indicates the logical removal of d.

And that was a very basic overview of the PGM index. There are further variants of this, fully described in detail in the paper. The successor from this is a Compressed PGM index which compresses the tuples. Then we have a Distribution-aware PGM index which adapts itself not only to the key distribution, but also to the distribution of queries. This is desirable in cases where it’s important to have more frequent queries respond faster than rare ones. Finally, we have a Multi-criteria PGM index that can be tuned to either optimize for time or optimize for space.

I have also created a port of the algorithm in Go here to understand the algorithm better. It’s just a prototype, and suffers from minor approximation issues. For a production-ready library, refer to the author’s C++ implementation here.

Lastly, I would like to thank Giorgio for taking the time to explain some aspects of the paper which I found hard to follow. His guidance has been a indispensable part in my understanding of the paper.